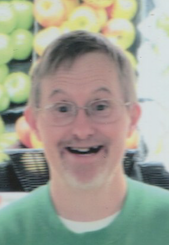 Troy E. Murphy, age 56, Warsaw, died at 5:11 p.m. on Monday, September 6, 2021 at Miller’s Merry Manor where he had been residing for the past eight weeks.  Before being admitted there, he lived at Cardinal Services for six years in Warsaw.

He was born on June 18, 1965 in Warsaw, Indiana to Paul L. and Beverly Sue (Horn) Murphy.  He lived all his life in the Akron area with his mother up until six years ago when he moved to Cardinal Services in Warsaw, Indiana.  He graduated from Tippecanoe Valley High School in 1983 where he earned a letter jacket and was a proud Viking.

Troy worked at Viking Foods in Akron, Indiana and loved to talk about it.  He was employed at that job for 27 ½ years and was well known and beloved by customers and members of his community.  He was described as a sweet, kind and generous gentleman.  He would often ask if there was anything he could help you do and was a joy to be around.  He loved cheeseburgers and pizza and would eat them every day if he could.  Troy will be greatly missed by all who knew and loved him.

Troy was a member of the Silver Creek Church of God in Silver Lake, Indiana.  He was a member of the Akron Lions Club and was very helpful in any task asked of him.  He was in the Special Olympics of Fulton County where he earned many medals.  He was a fan of the Chicago Cubs and the New York Jets.  He enjoyed bowling and shooting baskets.  Troy also attended “Camp We Can” in Rochester from the beginning until just a few years ago.

Preceding Troy in death was his father, Paul Murphy who died on December 4, 1988.

The funeral service will immediately follow visitation at the funeral home officiated by Pastor Tom Craig.  Burial will be in the Silver Creek Cemetery.

Online condolences may be sent to earllovefuneralhome.com

The staff of Earl-Love Funeral Home considers it a privilege and an honor to care for the family and friends of Troy E. Murphy.

To send flowers to the family or plant a tree in memory of Troy E. Murphy, please visit our floral store.

A Memorial Tree was planted for Troy

Join in honoring their life - plant a memorial tree